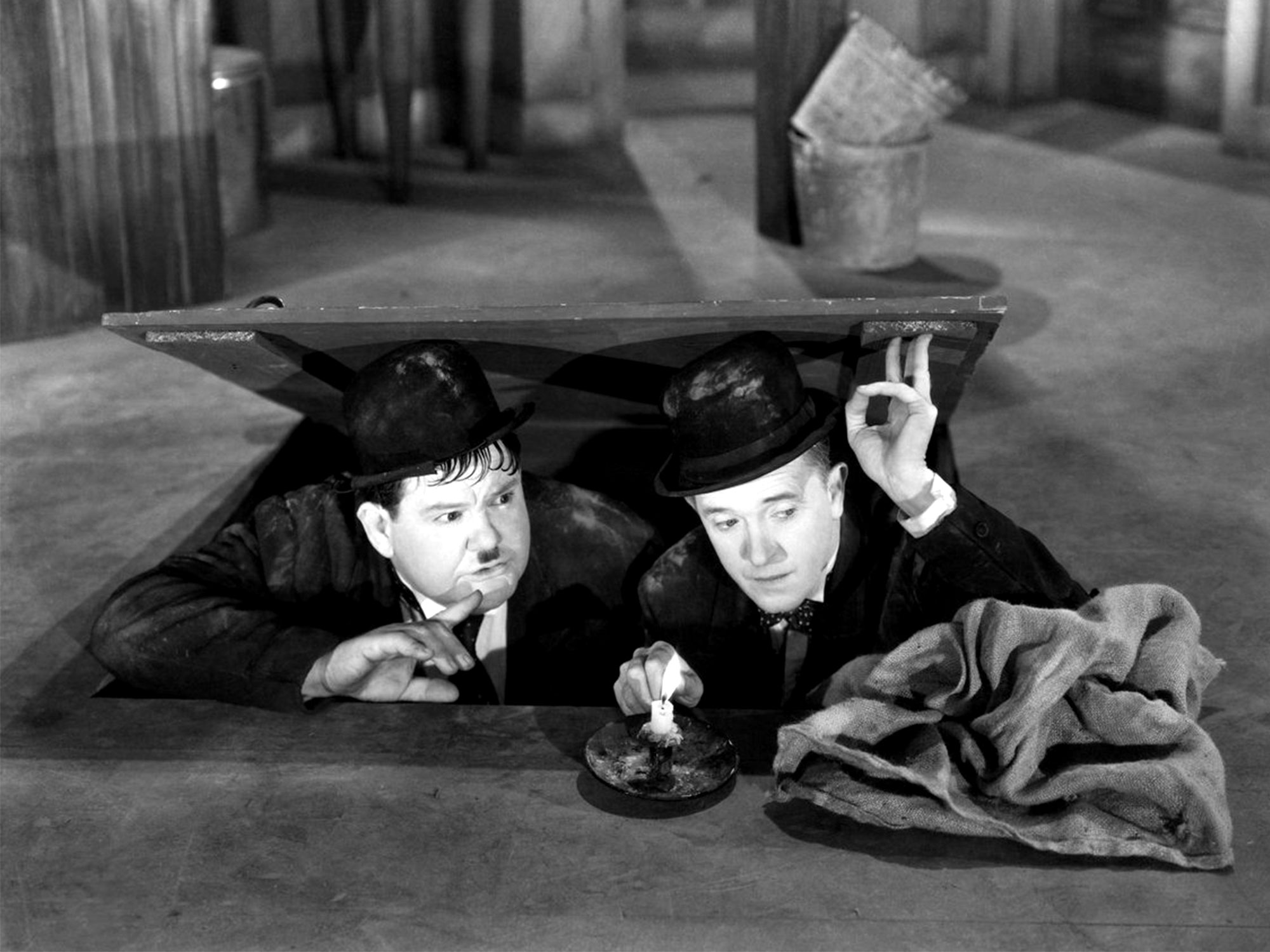 There are some films you watch when you need a warm hug from a familiar source. There’s no new terrain to explore, no outside world, no alarms and no surprises – they are simply soothing. Since a global pandemic was declared on 11 March, daily life has become so strange that the solace offered by comfort blanket movies is enhanced. In this series, we want to celebrate them, in whatever form they take.

I typed the words “Way Out West” into Google so as to double check the release year of this Laurel and Hardy classic, and was shocked (but not surprised) to notice that the top result yielded by my search directed me to an annual rock festival held in Gothenburg, Sweden. I don’t resent the festival as there’s clearly no copyright on the name Way Out West (hell, it may even be an homage?), but it’s sad that James W Horne’s 1937 film has been nudged down the power rankings, as now more than ever it deserves to luxuriate in the limelight.

I have selected this hour-long slapstick comedy as my comfort blanket movie for two reasons. The first is that it is a relentlessly funny film. Not a single scene passes by without some silly sight gag or a prolonged comic pause or an immaculately executed pratfall. It opens with our heroes rolling up into Brushwood Gulch with the task of delivering the deed of a goldmine to one Mary Roberts.

For reasons pertaining to the delivery of unadulterated, no-strings-attached pleasure, we join the pair as they are stood in front of a saloon while a little singing troupe kicks off the yodel-core classic, ‘Commencement to Dancing’. At first, Laurel and Hardy resist the pull of the music, yet from their body language they clearly know the song. And then, slowly but surely, they execute a perfect dance routine of the sort you might reserve as an after-dinner parlour game, and would likely involve a woman and a man. In this case, Laurel and Hardy inhabit duel genders to make the dance work.

I sometimes watch this sequence on YouTube when I need a reason to laugh, or if time constraints won’t allow me watch the entire film. This sequence is the reason why Way Out West is widely heralded as a comic masterwork – it is a pristine stand-alone set piece which almost operates as shorthand for everything that’s wonderful about the film as well as a lengthy checklist of reasons as to why Laurel and Hardy are still considered to be the greatest comedy double act in all cinema (with apologies to Chris Farley and David Spade).

The second reason I chose this film is that it’s makes me remember a vivid moment from my childhood when I laughed the hardest I have ever laughed. And not only that, I was in the company of two other people who were laughing extremely hard at the same time as me (though I don’t presume to know whether this would also be deemed an all-time hilarity high on their part).

The reason why the moment is so memorable is because the other people were my younger brother and my late grandfather, who owned vast, recorded-from-TV holdings of classic-era comedy, covering everything from the Marx Brothers and Buster Keaton to Chaplin and WC Fields. We would visit him about every other week, and it was never considered to be a chore because we knew, after the tea, biscuits and formalities, he’d be as eager as we were to slap some Laurel and Hardy on the TV while my mother would knit and roll her eyes.

The scene in question which caused this laughter meltdown was not the dance sequence, because that actually took a little longer for me to fully appreciate. It’s actually a later scene where Stan Laurel is being chased around a bedroom by a conniving moll who is pretending to be Mary Roberts in order to secure the deed. He refuses to give it over and slips the deed into his vest, and so she tickles him as a way to force him to relinquish it.

Laurel’s laughter just sent us all – in triplicate – over the very edge. I remember me and my brother were literally rolling on the floor, clawing the sofa, tears streaming down our eyes, while my grandfather was in his easy chair next to us. His laugh was grainy and abrasive – a bit like when a cat scowls – perhaps due to the fact that he was a very heavy smoker.

This must have been when I was about ten and he died when I was 18 of natural causes. He was an extremely generous man, often wanting to give more than he actually possessed. We watched many Laurel and Hardy films together, mostly Sons of the Desert, Blockheads and The Flying Deuces. All of them I hold very fondly in my heart, but it’s Way Out West that reminds me of the time that my brother, my grandfather and I almost performed hara-kiri by laughing on one otherwise unspectacular Sunday afternoon.